India is set to reopen its borders to overseas travellers as it relaxes Covid-related restrictions amid a drop in daily infections.

The facility will be extended to those arriving on commercial flights from 15 November.

Foreign tourists who land in India on Friday will be the first to come into the country in 19 months.

No tourist visas have been issued since March 2020 when Prime Minister Narendra Modi's government shut the country's borders to rein in the coronavirus pandemic. In the past few months though, some visas for diplomats and foreign business officials have been reinstated.

The decision to allow foreign tourists, announced earlier this month, comes at a time when India's daily Covid cases have been falling.

The country has been recording about 20,000 daily positive infections - down from a peak of 400,000 daily cases during a devastating second wave that swept India in April and May. More than 70% of the population has received one dose of the vaccine.

However, experts and government officials continue to warn against complacency, saying that popular tourist destinations could act as Covid "super spreaders" of a third wave of infection which, they say, is inevitable.

The easing of restrictions on foreign travel also coincides with the onset of India's peak travel season, sparking hopes of revival of the beleaguered tourism industry.

With its rich geography and history, India offers a large number of tourist attractions such as the Taj Mahal monument, temples and forts, the snowy mountain peaks of the Himalayas and the white sandy beaches in the west and south. 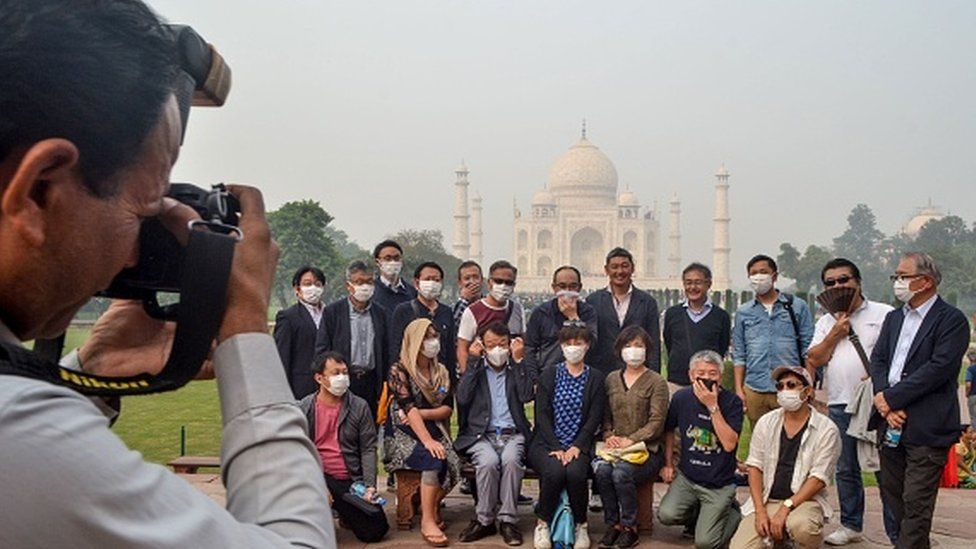 IMAGE SOURCE,GETTY IMAGES
Image caption,The Taj Mahal is one of the leading tourist attractions of India and is visited by thousands of people every day

According to government data, India attracted just 2.74 million foreign tourists last year - down from 10.93 million in 2019 - as the pandemic upended lives and businesses.

Tourism contributes almost 7% to India's GDP and is also responsible for millions of jobs in the hospitality sector. With the economy struggling like never before, India cannot afford to lose out on the precious foreign exchange that tourism brings.

Under the new guidelines, all tourist visas issued before 15 October will be invalid. This means that travellers coming to India will have to get fresh visas.

"All due protocols and norms relating to Covid-19 as notified by the Ministry of Health and Family Welfare from time to time, shall be adhered to by the foreign tourists, carriers bringing them into India and all other stakeholders at landing stations," the government said in an official release.

However, the authorities are yet to spell out the testing, vaccination, and quarantine rules for travellers.