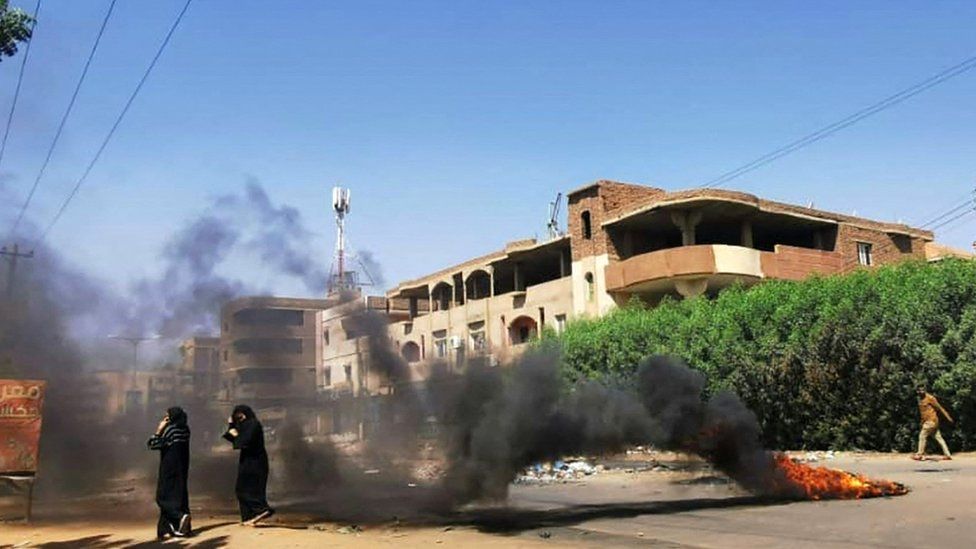 Sudanese security forces have fired tear gas at dozens of teachers who were taking part in pro-democracy protests in the capital, Khartoum.

There are reports that many teachers were detained by the security forces.

Overnight demonstrators set up barricades for the first of two days of planned civil disobedience to protest against last month's coup.

They are demanding the military government step back and allow a peaceful transition to civilian rule.

The demonstrations are happening as Arab League mediators arrive in Khartoum for talks to try to defuse the crisis.

The civilian Prime Minister, Abdalla Hamdok, remains under house arrest and is facing pressure from the military to co-operate with them, the BBC's Andrew Harding reports from the capital.

Disruptions to the internet had left some people unaware of the two-day civil disobedience action but teachers turned out to protest near the education ministry.

"We organised a silent stand against the decisions by Burhan outside the ministry of education," Mohamed al-Amin, a geography teacher, told AFP news agency.

"Police later came and fired tear gas at us though we were simply standing on the streets and carrying banners."

'The military won't rule us'

Victims of the military clampdown are being treated in Khartoum's private Royal Care hospital.

Muhayed Faisal, an 18-year-old student, was shot twice in the leg during a recent protest. "I was shot along with nine people. There were no warning shots, they just started to fire. The military… they're like animals. Maybe animals are better."

He's now had three operations on his right leg. "Our cause didn't change - the military won't rule us," he said, as a doctor stroked his foot to test if any sensation had returned.

In a nearby bed, a 54-year-old tailor, Yair Mohamed Ali Abdulla, was surrounded by relatives. He'd left his shop to join the protests when the coup took place. He said he was deliberately run over by soldiers in a vehicle near Khartoum's international airport.

"After that, five or six people beat me mercilessly with sticks on my back and chest. I just went [to the protest] to ask for freedom, peace, and justice. If the army can't provide that, they should take off their uniforms and let those who can come and take charge," he said.